Tropedia
Register
Don't have an account?
Sign In
Advertisement
in: Trope, Older Than Steam, Transformation Causes,
and 6 more

A Wizard Did It 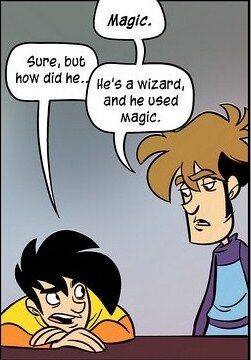 The standard all-encompassing explanation for any continuity errors noticed by hardcore fans of any given fantasy show. If it doesn't make sense, A Wizard Did It. Move on, nothing to see here.

Can be used to Hand Wave away minor nitpicks and Contrived Coincidences that should really be covered by Willing Suspension of Disbelief. However, using it to excuse major Plot Holes that the creators really should've caught beforehand will make people rightly angry.

Often used in the literal sense, as in the page picture, where something that would be impossible happens because someone explicitly used magic to make it happen.

This explanation can also often bring some extra Fridge Logic into a story, when A Wizard Did It is given as an explanation and the wizard later fails in a situation in some way that could have easily been solved by the wizard just doing what he apparently did before. This can also lead to Reed Richards Is Useless when you realize the possible, fantastic uses of that random magic trick nobody seems to care about.

Not to be confused with The Butler Did It.

Examples of A Wizard Did It include: