Tropedia
Register
Don't have an account?
Sign In
Advertisement
in: Trope, The Wild West, Costume Tropes,
and 2 more 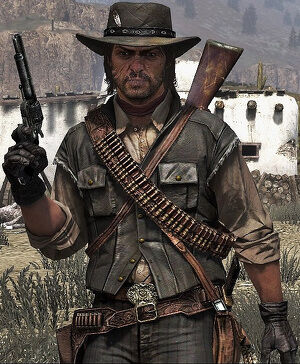 Bandoliers are belts that hold ammunition for Cool Guns, grenades, or just weapons in general (or even mundane items). They also give off coolness and Badassery when worn.

The fundamental concept is that a warrior will want to wear all of his equipment close at hand, so the bandolier sends a message that the wearer expects combat. Various cultures have used bandoliers for different purposes. In the age of muzzle-loading firearms, a wealthy soldier might wear multiple single-shot pistols so he could discharge them rapidly one after the other without reloading. Cavalrymen and banditos of the Old West might also wear multiple pistols, as reloading was still a laborious process through the 1800's. In the latter half of the 1800's, cartridge technology made it feasible to wear individual bullets or shotshells in the bandolier. It was a sort of status symbol to wear a fully-loaded bandolier, as this showed you were not only a warrior but also wealthy enough to maintain a full complement of ammunition.

The use of a bandolier is not without its problems, however. Munitions exposed to the elements may corrode and become unusable. Since the invention of the machine gun, soldiers in fiction tends to sling ammunition belts over their shoulders to present a menacing appearance. This has been to the consternation of more veteran soldiers who understand that this will cause the belted ammo links to rust so that they cannot be fed into a weapon, in reality, ammo belts tends to be carried in metal boxes until they are needed. Hollywood often depicts soldiers with hand grenades dangling from their bandoliers (John Wayne being perhaps the most famous example of this). This is also a bad idea, as a hand grenade dangling from equipment may become snagged as a soldier crawls or moves through rough terrain, with unfortunate results - this is especially true for the common depiction of the grenades dangling by their pins. Unfortunately, young soldiers would try to emulate what they saw on television. Vietnam veteran David Hackworth once recalled a soldier telling him the Army would not provide grenade pouches because they believed John Wayne was wearing his munitions "the right way," another example of life imitating art.

In the modern world, cross-body bandoliers are only common among poor armies and militias. Pouches and magazines are used to avoid the problems mentioned above. The American army only uses canvas bandoliers to carry packaged bulk ammunition, while in combat all equipment is worn on vest and belt pouches.

Modern hunters who use slow-reloading bolt-action rifles or single-shot rifles would usually have a leather or canvas bandolier slung across the chest or around the waist in the time-honored manner, or a smaller 5-10 round bandolier wrapped around the rifle stock.

In Wild West settings, Banditos will stereotypically be wearing them, in emulation of Pancho Villa.

Examples of Badass Bandolier include: