Tropedia
Register
Don't have an account?
Sign In
Advertisement
in: Trope, Paint the Index Red, This Index Is Brown,
and 7 more 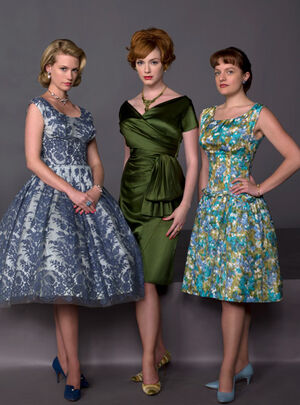 The hair equivalent to vanilla, chocolate and strawberry. The trope is strictly for visual appeal; they are not personality types.

Sometimes, they're heroes. Sometimes, they're friends. Sometimes, they're contenders, vying for the same love interest. Whatever the details, they're proof that Central Casting does the math: three women, three major hair colors. Collect the full set. This trope was inspired—or at least made famous—by The Andrews Sisters, a Girl Group from the 1940s who were famous for entertaining American troops during World War Two.

Strictly speaking, these women need not have the exact Clairol hues of blonde, brown/black and red, particularly when stepping away from the natural spectrum. The blonde will have the lightest hair, the brunette the darkest and the redhead will have a distinct moderate shade—all for instant sight recognition.

Sometimes, a Token Minority may either replace the Caucasian brunette or stand beside her. The latter case can match the Four-Girl Ensemble: the Black Girl, the Blonde (sweet or dumb), the Brunette and the Redhead. Compare with the common individual component types: Dumb Blonde, Brainy Brunette, Shy Blue-Haired Girl and the Fiery Redhead. Contrast Plenty of Blondes.

Examples of Blonde, Brunette, Redhead include: