Tropedia
Register
Don't have an account?
Sign In
Advertisement
in: Trope, Anatomy of Metal, Stock Phrases,
and 3 more 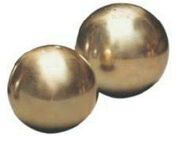 Sometimes a person does something that's very brave or dangerous, this or one of many variants of this statement is said. For example, "Insulting his boss like that... man he got balls of steel!".

Once in a while said for female characters even with lack of such parts. Or adapted into "brass ovaries" or something similar.

Not to be confused with attack on those parts... like Balls of Steel or Groin Attack.

Examples of Brass Balls include: