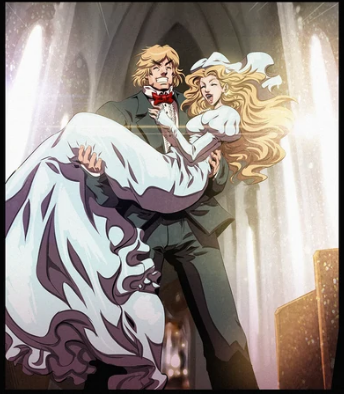 To put it simply, a man carries a woman (usually a Damsel in Distress or other non combat females) in his arms—one arm under her legs and the other supporting her back like a groom carrying his bride. Usually denotes or foreshadows a romantic relationship between the characters or a major difference in their physical strength. Often both.

Variations of this trope are common and include:

When the participants aren't romantically involved, expect fans to cite this as "proof" that they really are.

The Hero must be very careful when treating an Action Girl like this, especially if they're not involved. If asked properly, she may accept if she's indeed too hurt to walk. Other than that, she's likely to refuse. No matter what, The Hero shouldn't force it on her, else he may incur a less than grateful reaction.

This type of carry can also be used in place of the aforementioned Over The Shoulder Carry to kidnap Distressed Damsels, they will usually be visually stunned while in the arms of someone who is trying to relocate them against their will. Sometimes when the (usually female) victim in this situation is "protected" expect to see her visually struggle and protest compared to a usual do nothing damsel... this rarely works though. Very rarely will the one being carried physically hit their kidnapper despite their free arms being in range of the face of the one carrying them.

This type of carry tends to tick multiple boxes that appeal to many different demographics, romantics tend to see it as confirmation of the carry-er and carry-ee's feelings for each other and it could even be subltle fanservice as the pose somewhat emphasizes the hips and figure of the area around the hips of the one being carried especially if they are female.

In real life males tend to be taller than females due to more growth time allotted to them via a longer puberty cycle. Combining this with the female body having to allocate much more of it's energy to a more complex reproduction system and with the effects of testosterone making the male upper bodies stronger than females this is a popular way for men to carry women. Women tend to have their center of gravity at their hips making her weight more evenly distributed to the man carrying her like this making it somewhat easier than it appears when done to a female. Though as always there are exceptions.

(Slinging them over the shoulder in a Fireman Carry will manage to avoid this.)

If a guy carries another guy like this, expect the shippers to go nuts.

If the person being held is injured, dead or dying, it may cross over into Pietà Plagiarism. Usually coexists with rescue tropes like Rescue Romance and Embarrassing Rescue. See also Hold Me and Security Cling. Contrast Over-the-Shoulder Carry.

Not to be confused with Tribal Carry.

Examples of Bridal Carry include: