Tropedia
Register
Don't have an account?
Sign In
Advertisement
in: Work, Films of the 1990s, Broken Arrow 1996,
and 2 more 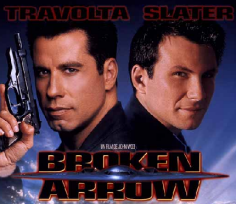 USAF pilot Major Vic "Deak" Deakins (John Travolta) steals a nuclear weapon to ransom back to the U.S. He steals two, and detonates one underground to prove he's not afraid to detonate it. His partner Captain Riley Hale (Christian Slater) and Park Ranger Terry Carmichael (Samantha Mathis) team-up to stop Deak. The term "Broken Arrow" is US military jargon for a nuclear weapons accident. This is actually an "Empty Quiver" made to look like one.

Ignoring the Jean-Claude Van Damme Ego Trip that was Hard Target, this film was western cinema's first proper introduction to John Woo's Heroic Bloodshed genre of film, the popularity of which is cemented one year later in 1997 by Face Off, also by John Woo and starring John Travolta.