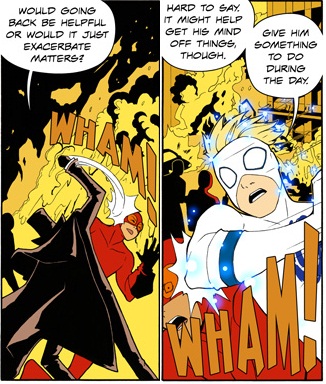 A common trend for characters in works of fiction seems to be to shrug off danger, or laugh at it. In totally serious drama, characters might be crying in fear or become "shell-shocked" from life-threatening situations, but in virtually any other genre, characters react to danger in any number of different, more calm, ways:

Depending on how it's handled, the first three occur most often in comedic shows, while the last one is most common in shows that don't lean too far towards humor, or want to be more realistic. The first three also happen fairly often in more serious works, but often with an edge of sarcasm or bitterness, implying that the hero isn't feeling particularly mirthful about the situation.

There's some truth to this. People in real life professions such as police or military become so used to life-threatening situations occurring every week, or even multiple times a day, that they end up engaging in Casual Danger Dialog all the time. For example, Evan Wright's nonfiction book Generation Kill has accounts of United States Marines under heavy machine gun and mortar fire and in the middle of pitched gun battles yet remaining almost psychotically calm under pressure. Even ordinary people can end up speaking this way, as it's well-known that many people use humor or sarcasm as a way of coping with stress or fear. See Gallows Humor, Stiff Upper Lip.

Usually done for comedic effect in comedies, naturally. Compare Talking Is a Free Action. See also Distracting Disambiguation. Contrast Say My Name and Big No, which involves meaningless exclamations that can seem as unrealistic as a quip. Truly Failure Is the Only Option when dealing with dramatic dialogue. The other intended effect is to communicate just how used to these situations the heroes are. When things are actually so bad that they don't do it, see Sarcasm Failure. If the person receives a phone call during a tense situation, see Kinda Busy Here.

Examples of Casual Danger Dialog include:

The Doom Comic is filled with Casual Danger Monologues.

And it ends with this...