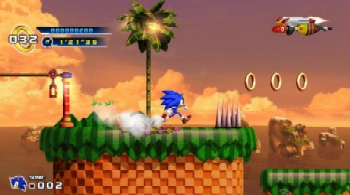 For many years, the dominant form of console video game. The Platform Game or Platformer is characterized by gameplay dominated by leaping over or onto enemy characters and between platforms of varying heights. In the traditional 2D platformer, play progresses from left to right. Other such games, mostly involving infiltration or return scenarios, choose the sneaky approach from the right. Some games (especially older ones) only allow movement in one direction. An Auto Scrolling platformer advances the scenery independent of the Player Character's movement, and thus the player can be pinned by a platform as it scrolls off the screen. Auto scrolling was rare for entire games, but frequently appeared for individual levels.

As a rule, Player Characters in the platformer are critically injured by colliding with enemies, can jump very high, and, in accordance with the special laws of physics applicable to video game characters, are able to change direction in mid-air. Bottomless Pits and other kinds of pit traps are common hazards.

The first games which started to have platform game elements are Frogs (first game which included jumping, but no platforms) released for the arcades in 1978 and Space Panic (which had platforming, but no jumping), released in 1980. Finally, Donkey Kong, which was released a year later, put those two things together, and Jump Bug added side scrolling to the mix.

The first game widely considered to fit this format is Pitfall, but the style gained its widest acceptance with Super Mario Bros.. 2D platformers are still being made, due to their accessibility and ease of programming, as independent PC titles, web-based Flash games, and for the various handheld console platforms and cell phones.

The 3D equivalent to the platformer is almost always rendered in the third person, as with Super Mario 64 and Super Mario Sunshine, but Metroid Prime and its sequels are considered by many to be hybrids of the 3d Platformer and the First-Person Shooter (with Metroidvania elements, of course). The only straight first-person platformer series is Jumping Flash Lately, many games have been combining elements of Third-Person Action Games as well, such as the Jak and Daxter and Ratchet and Clank series.

Like most game genres, platformers are steadily evolving with the times; they started as linear obstacle courses, but gradually became less linear, with multiple level paths, playable overworld areas, and/or map screens with different routes; eventually, the genre even began branching into the Metroidvania genre. They became much less linear with the jump to 3D, and became known as 'collectathon' titles. The first few were fine, but after the thousandth or so knock-off, gamers eventually began to get sick of this. As a result, "collectathon" titles began waning in popularity. As of right now, the genre is in a weird stage of either being based on particular gimmicks, or going back to its roots. The former became puzzle games of a sort (eventually becoming prevalent enough to be considered a sub-genre), and the latter tend to be more linear, pure platforming challenges, and spawned the Platform Hell phenomenon.

Subgenres include Cinematic Platform Game (which has a more realistic style), Platform Hell (which is really, really freaking hard[1] - no, seriously), and Puzzle Platformer (which combines elements of Puzzle Games).