Crash Bandicoot the Wrath of Cortex 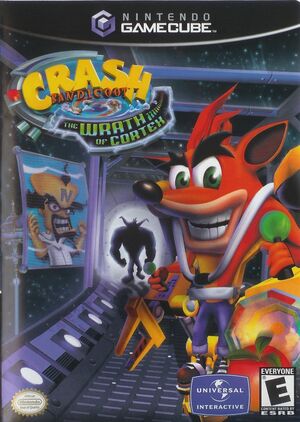 Within their secret lair in deep space, Dr. Cortex and his cronies are sour over their previous defeats by Crash Bandicoot. Uka Uka is giving them an intense chewing out, they still haven't conquered the world and their current evil productivity is pathetic. Within their convension over how to eliminate their nemesis, N. Gin brainlessly mentions Dr. Cortex's super secret project, Crunch Bandicoot, a super mutant with unbelievable strength. However, he requires a completing element. Uka Uka immediately devises upon releasing The Elementals, an destructive band of Elemental masks that had previously been imprisoned by Aku Aku, that can be used to power Crunch as well as bring chaos and destruction to the entire planet. Once again it is up to Crash and his sister Coco to save the day.

The sixth installment in the Crash Bandicoot series and the fourth platformer title. Crash Bandicoot: The Wrath of Cortex was also the first title in the series to make a leap to a next generation console. It was developed by Traveler's Tales' Knutsford division and originally released on the Play Station 2 and later ported to the Xbox and Nintendo Gamecube. The game, while maintaining itself as a "slow burner" in sales at the time, was met with mixed reception by fans and critics alike, essentially acting as a carbon copy of Crash Bandicoot 3 Warped with new levels and bosses, and despite doing a competent job of recreating the original games' gameplay, suffered from Loads and Loads of Loading and adding little new to the series (or at least little new that was productive), with the exception of Crunch.

Tropes Used In This Game: