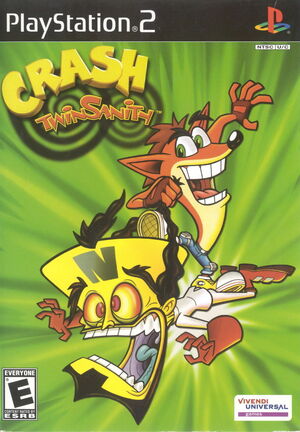 Crash Twinsanity is an action platformer, developed by Traveler's Tales, and is the fifth game in the Crash Bandicoot series, released for the Playstation 2 and Xbox

Designed as a departure from the usual Crash level style, Twinsanity greatly opens up levels, giving the game a more free-roaming feel. In lieu of totally linear levels, every 'stage' flows seamlessly into the next, and are more open for exploration. There are hidden areas and collectables scattered throughout the game, making many levels have small side paths or puzzles to complete. Despite these changes to form, the game manages to feel very Crash-like, possibly more than its extremely standard predecessor, Crash Bandicoot the Wrath of Cortex, also developed by Traveler's Tales.

Three years after the events of Crash Bandicoot the Wrath of Cortex, Crash has returned to his usual sedentary lifestyle of sleeping on the beach, Cortex stuck out in the antarctic wastes. But while digging up an old shoe, he hears his sister calling for him, following her into the jungle... Turns out, it's actually Dr. Cortex, still bitter about his last defeat, and has gathered most of Crash's old foes together to watch his demise. Despite giving it his best shot, and even bringing in a giant robot version of Crash, Cortex ends up defeated once again. Later, Crash and Cortex end up meeting the Evil Twins, strange, bird-like creatures from the Tenth Dimension, who've come to get some sort of strange revenge on Cortex, take over the dimension, and make everyone their slaves. This forces Crash and Cortex to set aside their differences, and form a very uneasy alliance against them, and make their way to the Tenth Dimension to stop their evil plans.

But as bright and happy a game as it is, the story behind it is not as fun.

Their intention was to make a huge game, full of what made the Crash games so good and then some, and spanning multiple dimensions, and even planets, where Crash would help out the locals in fending off the Evil Twins' forces, called Crash Bandicoot Evolution.

Despite loads of concept art and tons of ideas, Evolution was scrapped in favor of the simpler Twinsanity, which would simply span a few islands and a few dimensions.

But even that turned out to be too much, even more was lost as Executive Meddling began, Universal Studios Interactive started pulling back the deadline, rushing the game into its unfinished state. Entire completed stages and mechanics were Dummied Out to save time, and the game was released buggy and incomplete, although enjoyable in its own right.

Poor reviews and poor sales were the final nail in the coffin for Traveler's Tales Oxford, and the studio shut down soon after, leaving Crash to be handed over to Radical Entertainment.

Whether that was a good thing is up to you.

Tropes Used In This Game: