Tropedia
Register
Don't have an account?
Sign In
Advertisement
in: Trope, Idealism Tropes, Tropes of Legend,
and 16 more 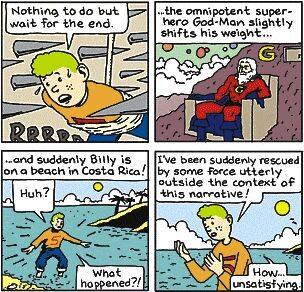 A common form of Ass Pull or Writer Cop Out, a Deus Ex Machina is an outside force that solves a seemingly unsolvable problem in an extremely unlikely (and, usually, anticlimactic) way. If the secret documents are in Russian, one of the spies suddenly reveals that they learned the language. If the writers have just lost funding, a millionaire suddenly arrives, announces an interest in their movie, and offers all the finances they need to make it. If The Hero is dangling at the edge of a cliff with a villain stepping on his fingers, a flying robot suddenly appears to save him.

The term is Latin for god out of the machine (pronunciation: Day-oos eks MAH-kee-nah) and has its origins in ancient Greek theater. It refers to situations in which a crane (machine) was used to lower actors or statues playing a god or gods (deus) onto the stage to set things right, often near the end of the play. It has since come to be used as a general term for any event in which a seemingly fatal plot twist is resolved by an event never foreshadowed or set up.

There are four primary forms a Deus Ex Machina can take:

Note that the Romans and Greeks used type 1 and 2. This was mainly due to tradition; unlike today, audiences in ancient times were openly violently hostile to excessive innovation to the point that they would break out in riots if a writer tried to go too far. Some moderns assume, wrongly, that true art sticks it to the man and always has, and crow that ancient writers were cowed by "royalty" not to be controversial. In reality theatric performances were staged by the aediles, minor elected officials who didn't have the authority to arrest anyone. The Emperors (when they did arise—for most of this time period Rome was a republic and had no royalty) treated theatre as if it were beneath their notice—in fact, the only theatre person to get in serious trouble did so after cuckolding the Emperor (plus Nero, who thought he was a theater person and got in trouble for unrelated reasons).

The lines between Deus Ex Machina and other devices are thin and blurry. If the villain above suddenly falls a victim to an offscreen sniper's shot without any plot connections it would likely be type 2: Big Bad is likely to have foes, but here's a Contrived Coincidence. If this sniper turns out to be some long-forgotten Victim Of The Week or a relative, it's type 3. If one of hero's potential allies did refuse to participate in the action, but decided to act on his own and it's in character, it may be type 4. If the villain was earlier attacked by some enemies, lurked in his lair with tight security, but then went out of his way to punish the hero and made a good target of himself by posturing and gloating in the open, it's not even Chekhov's Gun, just a death by carelessness.

In the early years of the film industry, however, the concept came back into vogue due to the Hays Code. Villains, and anyone else who didn't toe the moral line, were absolutely not allowed to get away with their crimes, but as everyone knows, Evil is Cool. The solution was to let them be awesome for the duration of the movie, then drop a bridge on them in the last five minutes. It worked, of course.

In spite of the above, even the dreaded Deus Ex Machina - perhaps the most notorious of tropes among readers, beating out Mary Sue - can be pulled off. There are ways to have a Deus Ex Machina resolution and still come to a satisfying conclusion - see the entire "Rule Of X" series of tropes: Rule of Cool, Rule of Cute, Rule of Empathy, Rule of Fun, Rule of Funny, Rule of Romantic, Rule of Scary, Rule of Sexy (for those ever-so-fun Deus Sex Machinas), Rule of Symbolism, and especially Rule of Drama. The key word, of course, is "satisfying." It's definitely more difficult to achieve with some Rules than with others but not impossible for any of them.

As noted below, this happens plenty in real life. Of course, Real Life is a much more complex system than most fictionalized versions of it, and so this ends up a legitimate plot twist. Fiction is also limited by the Law of Conservation of Detail, while real life clearly is not.

The word Deus ex Machina is also taken literally as a term for making ourselves gods through the application of technology, e.g. The Singularity; this isn't what it means at all! (Not that it wasn't a clever attempt at wordplay in the titles of the cult PC video game classic Deus Ex, its sequels, the unrelated manga Deus Ex Machina, or the trope Deus Est Machina).

Also also, please make sure you have read the above criteria BEFORE submitting an entry. This is a not a place to Complain About Plot Twists You Don't Like.

Examples of Deus Ex Machina include: