Tropedia
Register
Don't have an account?
Sign In
Advertisement
in: Trope, Characters As Device, Character Flaw Index,
and 5 more 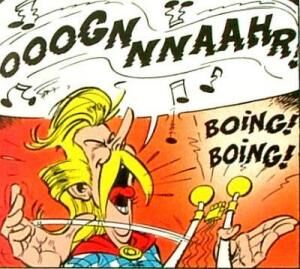 What a Lethal Chef is to food, a Dreadful Musician is to music. This is a character who plays music badly. Glass shatters, animals scatter, and women lament. Even worse, they may not even realize how bad they are, while everyone around them scrambles to halt the performance.

More Genre Savvy characters may use this entirely-unintended effect to their advantage. Taken to the extreme, where this effect is obtained through skill and used as a weapon, the character becomes a Musical Assassin. If the lethality is the product of the music itself instead of the musician's lack of talent, it's Brown Note.

Hollywood Tone Deaf is the lighter, and slightly more tolerable, version of this kind of musician. If they truly don't know how awful they are, then they're also Giftedly Bad. May overlap with Loud of War, Lounge Lizard.

Compare Suckiness Is Painful. Also compare Three Chords and the Truth, where musicians do actually know how to play their instruments, but without the complexity and pretentiousness.

Examples of Dreadful Musician include:

Although, to be fair to Riley, he was affected by an alien disease at the time.