Even Mooks Have Loved Ones 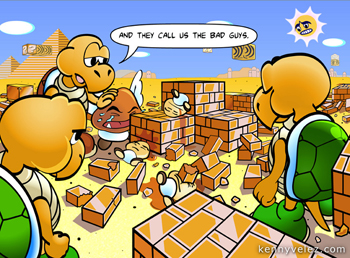 Mooks, Evil Minions and even The Dragon have a family, and can form romantic relationships and friendships just like normal people. On and off the clock. Their Bad Boss however, usually doesn't understand or seriously misjudges the emotional attachment present. Eventually, it results that the Big Bad's Evil Plan calls for the indirect suffering or death of their friend/love interest/family member. Maybe the continent they live on is being targeted with their boss' orbital Death Ray. Perhaps their boss wants to kill all Xes, and the significant other happens to be an X. Or the friend just so happens to be the hero.

Henchie will ask if he can at least save this one person they love... and the boss will refuse. For extra sting the effort needed would be minimal and the boss will rail on the henchman for placing others above his goals. Worse is the variant where the boss puts a gun in their hand and tells them to shoot as a proof of their loyalty. Despite whatever horrible things they've done, the resulting conflicting loyalties nearly always come up on the side of the loved one. As you can guess, this Egregious Villainous Demotivator will cause a Mook Face Turn pretty darn fast, or at least prompt the minion to release someone who can save the loved one... namely, the hero who is in the (actually) inescapable Death Trap.

Often, this is combined with High Heel Face Turn: a Capulet Counterpart or a Mad Scientist's Beautiful Daughter falls in love with the hero and can't bring herself to harm them.

Of course, if you want to show how really nasty a minion can be, it could be subverted in a Moral Event Horizon where they more than willingly accept the murder of their loved one. Bonus points if they made it slow and painful. Conversely, the hero may hold these loved ones in an inverted Hostage for Macguffin against the baddie.

A minor version of this would have the Hero pondering the fact that we're all somebody's kid, and wondering how the families of the mooks he's offed feel. To make it more powerful, the hero could encounter said loved ones and start a nice long guilt trip.

See also/compare Even Evil Has Loved Ones, Even Evil Has Standards, and Even Bad Men Love Their Mamas. Sub-Trope of Conflicting Loyalty. See also They Were Holding You Back or I Will Punish Your Friend for Your Failure.

Examples of Even Mooks Have Loved Ones include: