Tropedia
Register
Don't have an account?
Sign In
Advertisement
in: Trope, Trope Names From the French, Femininity Tropes,
and 10 more

The morally ambiguous Femme Fatale is the typical client in a Hardboiled Detective story. You know the type. Dressed all in black with legs up to here, she slinks into the PI's office, holding a cigarette on a long, long holder, saying "Oh, Mr. Rockhammer, you're the only one who can help me find out who killed my extremely wealthy husband." Did she do it? Do I care? Where'd that saxophone music come from? Whatever her story is, whether she did it or not, she's definitely keeping some secrets.

The Femme Fatale is sexy and she knows it. Made famous by Film Noir and hard-boiled detective stories, the Femme Fatale manipulates and confuses the hero with her undeniable aura of sexiness and danger. He knows that she's walking trouble and knows much more about the bad guys than she should, but damn it if he can't resist her feminine wiles.

Unlike the virginal and sweet Damsel in Distress (or Action Girl with a similarly gentle attitude), the Femme Fatale exploits with everything she's got to wrap men around her finger. However, Status Quo Is God, so by the end of the story, the Femme Fatale must either be reformed by the hero to the side of good and lose much of her appeal in the process, or be outwitted by him to her doom.

If the Femme Fatale is vying for the hero's romantic attentions, she will almost never win because of her illegal and low means of beating out her sweeter and purer rival, and the hero will decide that she's not worth the trouble she causes. This remains true even if she becomes a reformed character.

What separates the Femme Fatale from The Vamp is that the Femme Fatale uses femininity and sensuality instead of upfront sexual advances. Her wiles include apparent helplessness and distress, and appeals to the man's greed, desire for revenge, or gullibility, as well as the implication of possible romance or just sexual rewards, compared to The Vamp's reliance on raunchy sex or the promise of it and utter amorality otherwise. As a possible result of this, she is more likely to be portrayed sympathetically than the average vamp.

While the Femme Fatale is generally evil, or at least morally conflicted, there are occasional exceptions, most notably, the leading ladies of Mission Impossible or Charlie's Angels. They are using their feminine wiles in an artificial context to snare the bad guy...all for the greater good, of course.

Often the Lady in Red, and even more often the Woman in Black, but possibly dressed like everyone else so as to not be Colour-Coded for Your Convenience. The Femme Fatale is one of the female character types that can often be seen wearing Opera Gloves, especially in conjunction with her sexy evening gowns, and, during the daytime (particularly in old Film Noir movies), is often seen wearing a "fascinator" or "pillbox" hat with a partial- or full-face veil. Not above using the Kiss of Distraction.

If she can fight, too, then she's really going to be trouble.

The younger version of this is the Fille Fatale.

This item is available from the Trope Co catalog. 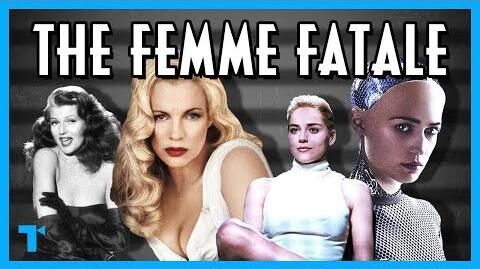 Examples of Femme Fatale include: