Tropedia
Register
Don't have an account?
Sign In
Advertisement
in: Trope, Villainous Fashion Sense, Who Was That Masked Index?,
and 4 more 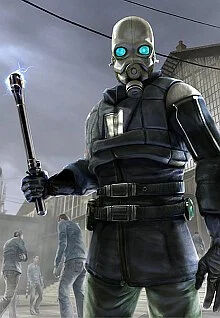 An extremely popular form of the Faceless Goons, achieved by taking your enemy Mooks and giving them all gas masks. Note that this almost always occurs in situations where the gas masks serve no real practical purpose, as chemical weapons aren't even a factor in whatever conflict is involved.

In situations (especially video games) where the majority of Mooks are not Faceless Goons, gas masks are often the mark of Elite Mooks. Despite the prevalence of gas masks amongst the enemy forces, it never seems to occur to them to use chemical weapons against the heroes. This is even though 1) being evil, they presumably have no qualms against doing so and 2) the heroes typically are wearing nothing except civilian clothes and a smile. If they're lucky.

Let us be brutally honest, though—it looks either damned cool or damned scary. There's a reason Vader's face looks like a stylized gas mask. May also show up as the Mask part of Coat, Hat, Mask, and more commonly as part of a Malevolent Masked Man ensemble.

The lack of an obvious need for gas masks may be justified as preventative measures. After all, nobody's going to use gas against an army issued gas masks, but they might well use it against one that isn't, leading to the illusion of gas masks being useless. British citizens were issued gas masks during World War II for this reason, even though (or as a result) Germany never used gas (in battle).

Examples of Gas Mask Mooks include: