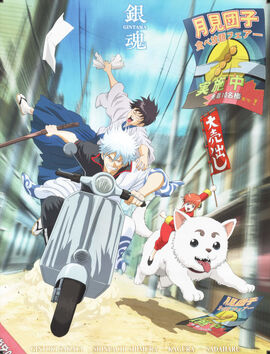 In an Alternate Universe version of the Edo period, Japan was occupied not by the usual Western fleets like you'd expect from normal history -- but by a race of space aliens known as the Amanto, who brought with them super-futuristic technology, a ban on swords and the fall of the Samurai class as we know it. A resistance group set out and declared war on the Amanto to no avail, and the samurai were all but wiped from the map. Enter Gintoki Sakata, a former member of said resistance group; once an impressive swordsman, he dropped out because in the end, it really wasn't worth it to be fighting against a bunch of stupid foreigners in the first place.

Nowadays, Gintoki makes his living as a self-appointed freelancer, taking on any job he can for cash to pay his rent, but that doesn't seem to happen very often when there's sweets and Shounen Jump to be had. Joining him in his exploits are samurai-in-training Shinpachi Shimura, who winds up taking the brunt of much of the series' abuse and leads a pop idol's fanclub; Kagura, a young alien girl who spends most of the time eating, beating someone up, or just generally being an idiot; and Sadaharu, Kagura's giant pet dog that gleefully chomps on everyone and anyone. A lot.

Gintama is the sometimes-anachronistic brainchild of Hideaki Sorachi, who had originally intended to create a manga inspired by an NHK drama about the Shinsengumi. However, despite the historical connotations that the Edo period brings, it's a Gag Series in one of its most warped states, filled with Shout Outs to everything under the sun (even fellow Shonen Jump series such as Bleach and Naruto are not immune to lampooning), over-the-top humour, ridiculous puns, sight gags and a liberal dash of action to top it all off. Stories tend to emphasize no such thing as black and white and how that plays into the Japanese concept of honor.

After the manga premiered in 2004, a one-episode OVA for JUMP Festa was produced; a Sunrise-produced TV series made its debut in April of 2006 and finished its run in March of 2010, after which Yorinuki Gintama-san (literally "The Very Best of Gintama") followed, which was essentially just reruns of old Gintama episodes remastered in HD with new opening and ending themes, eventually the reruns came to an end and in April 2011 Gintama was finally continued as Gintama' (Note the dash)...until that ended in March 2012. An English translation of the manga was published by Viz but was cancelled after Volume 23 due to low sales and the anime has been licensed by Sentai Filmworks for a North American release, the first volume of which was released in April of 2010.

Complete with its own Character page and Shout-Outs page where contributions are greatly encouraged and appreciated.

Tropes used in Gintama include: