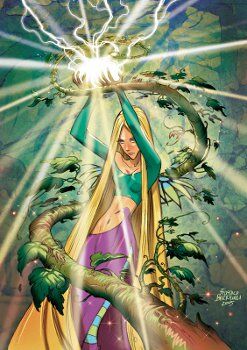 The power of supernatural control of plants (and usually fungi, too) via Super Powers or Applied Phlebotinum. People with this can essentially make plants grow, make them dance around like animals, create vines from the earth, summon poison ivy, sic trees at you, and so on.

It can easily overlap with What Kind of Lame Power Is Heart, Anyway?; even if the character is very powerful, they're liable to be mocked anyway. Writers often go out of their way to disprove these assumptions through displays of great power from plant-based characters. Sometimes, it can be considered a kind of Elemental Powers, especially if it allows the use of Petal Power. May be paired with Fertile Feet. May involve Talking to Plants. Often overlaps with Reed Richards Is Useless, since it seldom occurs to them to grow fruits and vegetables for the hungry or reverse the effects of deforestation. Symbol Motif Clothing can be involved if the wearer has several plant shapes on his/her clothing.

The Plant Person and Nature Spirit are especially fond of this trope. An especially powerful Green Thumb allows a character to create a World-Healing Wave. Sometimes classified as one of the Elemental Powers. Compare Friend to All Living Things.

Examples of Green Thumb include: