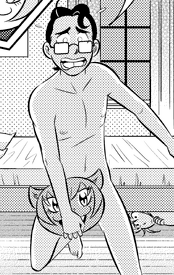 When a person covers up their nudity using their hands or an object. Unlike Scenery Censor, this is intentional on their part.

Can be done with men or women. Typically related to Sex for Product and Public Exposure. See also Godiva Hair and Improvised Clothes. Among photographers the breast version is sometimes known as the "arm bra."

Examples of Hand or Object Underwear include: