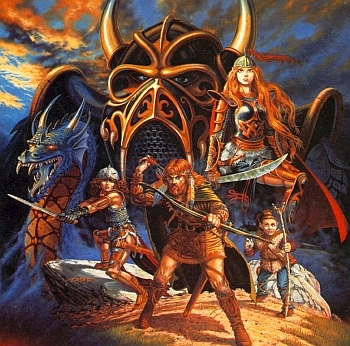 The setting of the stereotypical High (or "epic") Fantasy, a collection of tropes, often boiled down from The Lord of the Rings, which has been the foundation for many a series of doorstoppers.

Basically, the Dark Lord, thought defeated millennia past, has returned to his Dark Tower in the Dark Land, gathering around him evil hordes. The free lands have only one hope, a small band of lost heirs, princes, and simple village folk gathered together by a mysterious wandering wizard. However, it's not essential to stick so closely to the model.

Most core elements of high fantasy can be found in seminal literature from the 19th and early 20th century, but it was Tolkien that codified the genre.

The core elements of High Fantasy are:

Other common elements include:

The boundary between High Fantasy and Low Fantasy is probably impossible to pin down, but the Deverry and Deryni series are near the borderline, and may straddle it. In both, the protagonists are involved in high-level power politics, with the fate of their nation in the balance, but Deverry has superhuman evils which the Deryni series lacks. Another borderline series would be the violent, low-magic A Song of Ice and Fire, which is on an epic scale, in a pseudo-medieval setting, with the looming menace of the Others, but lacks a Dark Lord (so far). The Discworld novels as a whole are another problematic case; they are generally considered Low Fantasy, but several of them tick all the boxes on the core elements noted above and epic-level plots (like Thief of Time) happen just as frequently as street-level ones (like The Truth).

Novels which are unambiguously Low Fantasy include Eisenstein's Sorcerer's Son, about a family quarrel among wizards devoid of wider implications, Barbara Hambly's Stranger At The Wedding, where the threat is confined to a single merchant family, and Maskerade, whose villain, a normal human, has no greater ambition than to run an opera house. Not to be confused with Demythtification, which is a myth or legend reimagined as Historical Fiction.

Heroic or High Fantasy of Chinese cultural origin is known as Wuxia.

For other "epic" genres, compare Sword and Sandals and Space Opera.