Tropedia
Register
Don't have an account?
Sign In
Advertisement
in: Work, Animated Films, The Millennium Age of Animation,
and 5 more 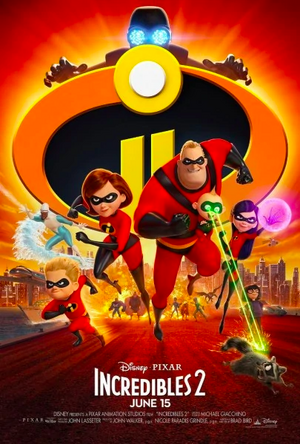 Everyone’s favorite family of superheroes is back, but this time Helen is in the spotlight, leaving Bob at home with the kids to navigate the day-to-day heroics of "normal" life. It's a tough transition for everyone, made tougher by the fact that the family is still unaware of baby Jack-Jack's emerging superpowers. When a new villain hatches a brilliant and dangerous plot, the family and Frozone must find a way to work together again — which is easier said than done, even when they're all Incredible.

A billionaire in charge of a massive tech company hatches a plan to make Supers legal again. Elastigirl must take down the Screenslaver, and in doing so, convince the public and lawmakers that Supers deserve to be legal. Meanwhile, Bob struggles to manage the kids, with all three having problems of their own.

For information on the DVD short Auntie Edna, see the Pixar Shorts page.

Tropes used in Incredibles 2 include: