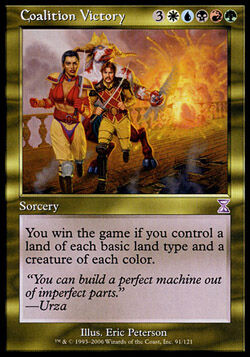 There's five seconds left on the clock and you're clinging onto a cliff edge over a pit full of spikes. The Invincible Minor Minions are at your front door, and they're charging straight to the NPC's you're required to Escort Mission. The Big Bad has just announced his Evil Plan to the world, and he's got his Kill Sat aimed at the entire planet. What are you gonna do?

Why, you win, of course.

No matter how bleak the situation, as long as you have enough Hit Points and enough time to stumble through the Level Goal, hit the superweapon's tiny Weak Spot, or set off some arcane victory condition, most video games will happily let all your troubles melt away with the victory screen. As the saying goes, he who loses with the most toys still loses.

A form of No Ontological Inertia. Variations and related tropes include:

Examples of Instant Win Condition include: