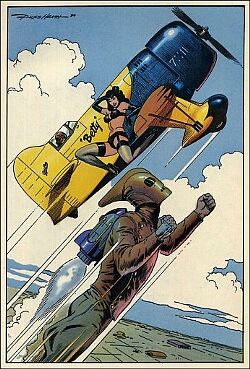 A standard piece of equipment for anyone from The Future. A backpack that lets the wearer fly by shooting jets of fire (or concentric rings of Pure Energy) out of the back, parallel to the wearer's legs. Strangely enough, nobody ever suffers Toasted Buns as a result. Nor do they ever run out of fuel, or even consume any fuel of any sort in the first place.

Due to its ubiquitous appearances alongside the Flying Car as a predicted technological advance, it's one of the reasons why people declare I Want My Jetpack.

A Sub-Trope of Flight and Awesome Backpack. Not quite related to Stupid Jetpack Hitler, although jet packs may be involved there as well. Compare Helicopter Pack.

Examples of Jet Pack include: