Tropedia
Register
Don't have an account?
Sign In
Advertisement
in: Trope, Just for Fun, Hello, Just For Fun 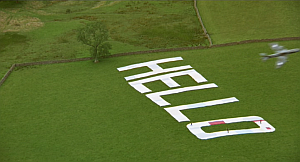 Fun fact: "Hello" (or "hullo") used to be an expression of surprise or questioning (as in "Hullo, what's this?") until around the turn of the 20th century when it became the standard expression for answering the telephone. The modern use and spelling was "invented" by Thomas Edison; the first use of it with modern spelling was as a greeting in a letter from him to Alexander Graham Bell in 1887. [1] (This would have been the rather nautical "Ahoy-hoy!" if Graham Bell had his way. Mr. Burns would approve.) From there it went on to become the catch-all greeting it is today. In French, "Bonjour"[2], "Salut"[3] & "Allo"[4]. In Japan, they say "Konnichiwa" or (on the phone) "Moshi moshi" (which has a similar quirky origin story). However, lots of countries do include some variant of "Hello" or "Allo" even if only for answering the phone. Interestingly, the German "Hallo" is still also used to express surprise or disbelief, but it's probably more likely in Austria than in Germany.

Examples of Just for Fun/Hello include:

The primary reason this page exists is to make that phrase all blue.