Tropedia
Register
Don't have an account?
Sign In
Advertisement
in: Work, Kill la Kill, The Epic,
and 12 more 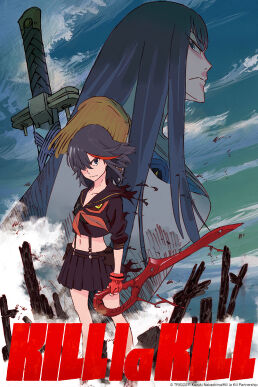 Kill la Kill (キルラキル, Kiru Ra Kiru) is an anime television series that premiered in Japan between October 3, 2013 to March 27, 2014 and ran for 24 episodes, with a 25th OVA episode that was released in September 3, 2014. The series is Studio Trigger's first original television anime project, directed by Hiroyuki Imaishi and written by Kazuki Nakashima, both of whom had previously worked together on Tengen Toppa Gurren Lagann, and with character designs by Sushio. A manga adaptation by Ryō Akizuki was serialized in Kadokawa Shoten's Young Ace magazine from 2013 to 2015. A videogame with a slightly divergent plot was released in 2019.

Kill la Kill is set at Honnōji Academy (本能字学園, Honnōji Gakuen), a fictional high school in Tokyo Bay set in post-apocalyptic Japan that is dominated by its fearsome student council, led by the VERY powerful Academic Alpha Bitch Satsuki Kiryūin and formed by her her henchmen, the Elite Four (四天王 shitennō) [Uzu Sanageyama, Ira Gamagoori, Houka Inumuta and Nonon Jazukure]. The council members wear special uniforms called Goku Uniforms (極制服 gokuseifuku, lit. high quality uniform, from gokusei + seifuku) that grant them superhuman abilities, which they use to oppress the rest of the school's students and staff...

Ryūko Matoi, a highschool girl wielding half a scissor-shaped longsword, transfers to Honnōji Academy in search of the owner of the other half of the scissor blade: the person who killed her father, the Mad Scientist Isshin Matoi. Defeated by the council after interrogating Satsuki over the killer's identity and whereabouts, Ryūko comes across a sentient sailor uniform she names Senketsu, who puts himself on Ryūko. Using Senketsu's special abilities, Ryūko stands up against Satsuki and the Elite Four to liberate Honnōji Academy from their iron grip and find out the truth behind her father's murder.

As she fights her way into Honnōji, Ryuuko makes a friend in a normal student named Mako Makasnshoku, whose humble family takes her in as a sort-of adoptive daughter. Then, she finds out that her father's past is deeply tied to Honnōji itself AND some of his old friends are still there (like the teacher Aikurou Mikisugi, actually a member of the anti-Honnōji rebel group Nudist Beach), and unlocks many truths, lies, and plans that are centered not just on Isshin, Satsuki and herself, but on the actual leaders of Honnōji: Satsuki's mother Ragyo Kiryūin and her henchwoman Nui Harime.