Tropedia
Register
Don't have an account?
Sign In
Advertisement
in: Trope, Characters As Device, Evil Is Sexy,
and 9 more 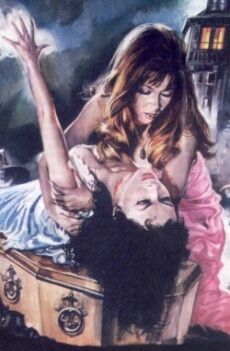 She's got the raven-black hair, the tight leather bodice, the pale skin, and the fangs. The one thing this sexy vampiress doesn't have is a lust for hot male blood. No, only the blood of an innocent young woman will do. And lucky for her, the nightclubs are full of easily swayed bi-curious beauties.

However, she'd better be careful to make sure that her next victim doesn't have a handsome young boyfriend or older guardian ready to leap in and save the day, or she might end up in an urn...

The Lesbian Vampire is an old, old trope, stretching back to the 19th century novella Carmilla by Sheridan Le Fanu, which heavily inspired Bram Stoker's rather more famous Dracula. However, it didn't return into popular consciousness until the 1970s, when Hammer Horror made numerous films in which voluptuous countesses nibbled nubile young women. Since then, the trope has pretty much become the default setting for most female vampires, adding an extra layer of titillation to an already heavily sexualised mythological creature.

This blatant sexualisation sometimes leads to a variation — the Bisexual Vampire (often of the Depraved Bisexual sort). In this case, the sexy vampire will happily take both men and women to bed, but her primary target for the duration of the story will usually be female.

A variation on the Lesbian Vampire, particularly in pornography and films aimed at the young male demographic, is the female victim who is seduced and converted by a male vampire and — either during the process of her seduction or after being transformed — begins to find women sexually attractive. This is sometimes explained as the vampire warping her mind so that she can become one of his harem, but usually, it is assumed that as soon as a woman joins the ranks of the undead, she immediately starts playing for both teams — such is the power of this trope.

This can lead to some controversial sexual politics; while the idea that lesbianism or bisexuality is the result of a corruptive and malign influence, representative of moral decay, was standard back in the olden days, today, it tends to be challenged. And if a female victim is transformed by a female vampire, it carries the implication that homosexuals are predatory and waiting to ensnare and 'convert' hapless heterosexuals.

On the other hand, this neatly provides a convenient fantasy outlet. If you're going to be seduced by sexy minions of the night, no one will blame you for enjoying it, right?

And, in yet another interpretation of modern media, lesbianism sometimes seems to come as part of the Take a Level In Badass package for young women.

In the works of some authors, such as Anne Rice, the Gender Flip version of this trope (i.e. male vampires attracted to other males) does exist; typically, they (like standard-issue female 'lesbian' vampires) are bisexual rather than exclusively same-sex attracted. If one were to use Fridge Logic, vampires don't reproduce through sex (except for when they do), and most half-vampyrs are usually bad news for them. So gender preference is just cosmetic anyway.

Examples of Lesbian Vampire include: