Tropedia
Register
Don't have an account?
Sign In
Advertisement
in: Trope, Comedy Tropes, Let Us Never Speak of This Again

Let Us Never Speak of This Again 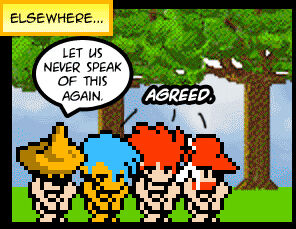 Hilarity Ensues because a character must perform an act that is either against their nature or which they have vehemently and constantly protested against doing. Said action can also be just plain humiliating or all of the above--to all parties, perhaps. When this act is aided or witnessed, a character insists that either they must all never speak of this again, ever; or that a specific person who is guaranteed to ride them never hears of it. A common reply to comply with the sentiment is say something to the effect of "Speak about what again?".

This trope can be used to introduce a Noodle Incident, with one character reminding the other they promised never to speak of that again. Alternatively they may have just completed the action, make some passing reference to how unusual or interesting it was, and then pull this line.

Subversions can occur when the character(s) kept in the dark reveal themselves to have known all along or if the character who would have used the incident as ammunition, against all expectations, chooses not to do so. Sometimes that somebody will bring it up again and earning the reaction "I thought we agreed to never speak of it again" or something close to that.

It can be parodied by the person(s) who are told to never mention it again is genuinely unaware of what happened for whatever reason, with them asking "Speak about what again?" getting taken by the person wanting the secret kept as a joke implying compliance with their wish.

Examples of Let Us Never Speak of This Again include: