Tropedia
Register
Don't have an account?
Sign In
Advertisement
in: Work, Films of the 2000s, Little Nicky 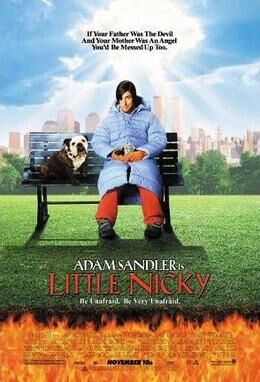 A Black Comedy film starring Adam Sandler as the eponymous Nicky, the third son of Satan (Harvey Keitel) and the female angel Holly (Reese Witherspoon) plus his dad's favorite.

After Nicky's two older half Big Brother Bullies Adrian (Rhys Infans) and Cassius (Tommy Lister Jr.) escape from Hell, the Gates of Hell literally freeze over. No new souls can enter, so Nicky must journey to Earth and bring his brothers back. Meanwhile, due to this, Satan's power is weakening and his body literally begins to fall apart. And Nicky goes through many adventures as he looks for Cassius and Adrian, even finding a girlfriend named Valerie (Patricia Arquette). . .

Mike Nelson has gone as far as calling it "the worst comedy ever made", though it remains a Cult Classic. It also has many, MANY cameos... including Ozzy Osbourne

This film contains examples of: