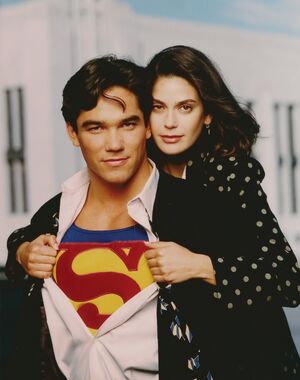 A 1993 live-action television incarnation of the Superman mythos, and one of the first superhero series aimed at women as much as men. The series is notable for its engaging cast, a few minor Post-modern aspirations, a fair amount of wit and the close focus on the romantic complication between the title characters.

Airing from 1993 to 1997, Dean Cain portrayed Clark Kent/Superman while Teri Hatcher played Lois Lane. "L&C", as it came to be known among fans, continued the trend of Post-Crisis Superman stories in identifying Clark as the "real" personality, with Superman as the role he puts on.

After the low-ish ratings of the first season the show was overhauled, including dropping gossip columnist Cat Grant (considered too sexy and flirtatious for a family show) and a recasting of Jimmy Olsen to be a much younger looking actor (the first one could have passed as Dean Cain's brother).

The show suffered, to an extent, from a known problem with live-action superhero shows: restraints on budget and their effect on the story (modern technological capabilities have reduced this somewhat, as can be seen on Smallville and Heroes). Superman rarely fought someone who was a physical match for him, with most villains either being secretive like Luthor or resorting to kidnapping innocents. Making up for this were the particularly well-thought-out character dynamics, the strong acting, and most of all, the phenomenal chemistry between Cain and Hatcher.

A bit controversial amongst sectors of the fanbase, particularly fans of The Adventures of Superboy TV series, which may have been killed by Warner Bros to avert the possibility of two competing Superman shows. In the final analysis, both series are unique in their own right, so pick your poison.

Was simply known as The New Adventures of Superman in some countries outside the USA, due to executives believing non-American viewers wouldn't understand the pun on 19th Century explorers Lewis and Clark (And what would it matter if they didn't?)

, with the deformed "Mr. Smith" as his valet. Actually, it's the other way around.