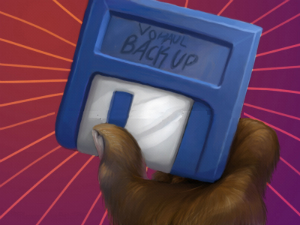 Aside from intentionally hi-tech looking machinery, the production teams for shows tend to use old items as props. Despite the high availability and low cost of removable drives, USB pen drives, and burnable compact discs (let's fast forward to the 2010s, where burnable DVD drives are extremely common, and even Burnable Blu-ray drives are not difficult to come by), the old standard 1.44MB plastic floppy disk seems to turn up a lot, especially in the hands of someone who would be very unlikely to use one. Not only will it turn up, but such older technology that appears will inevitably be jacked to the gills and capable of things it can't in real life. The Hacker/cracker character of a show usually has them, if only because they tend to be a fan of Schizo-Tech, which makes them look more out of place. If he's such a world-class computer expert, why is he using technology that's now over two decades old? Many newer machines do not even have built-in floppy drives. However, it's still used, because even the oldest and most computer illiterate viewer at least knows what a floppy disk looks like.

Most commonly averted in any show aimed at children born roughly after Zip drives (also a no-show on TV) were invented.

Japan's love of technology usually means anime will feature whatever computer media is popular that year. That comes with its own problems, notably Zeerust — for example, Neon Genesis Evangelion (and the current series of movie remakes) seems to suggest that DAT cassettes will be popular for portable audio in 2015 again (when it never really took off to begin with).

You might think this trope would also apply to audio media, but CDs replaced vinyl and even cassette tapes almost immediately in TV shows. Which is extra-strange, because it took well over a decade for them to catch on in Real Life. Vinyl still occasionally makes an appearance, justified by the fact it is still the format of choice for audiophiles and professional club DJs. On the other hand, mp3 players are still catching up.

Compare with Trope Breaker. See Technology Marches On if the item seems outdated now, but was state-of-the-art when the work was made. May lead to younger audiences wondering what the hell those funny-looking CD-ROMs are.

Examples of Magic Floppy Disk include: