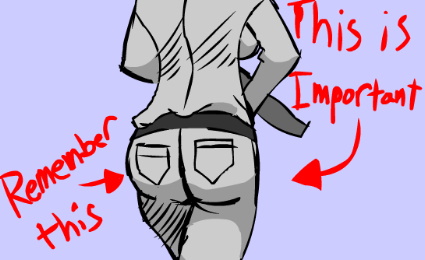 One of the most obvious results of Male Gaze is the way a (usually male) director/cameraman's interest in women informs his shots, leading to a focus on bust, legs, asses and other jiggly bits even when the film isn't necessarily supposed to be a T&A-fest. For example, a sex scene between a man and a woman may show more of her body than it does of his, or focus more on her reactions than his (see Right Through His Pants). Alternatively, it could appear in shows that aren't overtly sexual - for example, scenes of bikini-clad female characters talking that emphasize their bodies rather than showing just their heads.

The term also applies in other mediums, such as video games and comic books. During the Dark Age, comic books were often perfect examples of the male gaze, with scenes being framed to show off a female character's "assets" over everything else. The trend continues at a lower level today.

If the female in question is aware of the Fourth Wall, she'll likely snap "Ahem, eyes are up here!" at the camera/artist.

The concept was popularized in Laura Mulvey's 1973 essay "Visual Pleasure and Narrative Cinema," quite likely the most cited essay in all of Film Studies.

Examples of Male Gaze include: