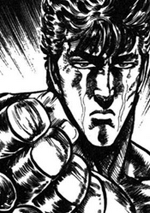 Somewhere down the line, it became the "norm" that boys don't cry. It doesn't matter the scenario; shedding any tears is the ultimate no-no in terms of what you can and can't do as a man (in Western societies, anyway). But there comes a time when a man's emotions do get the better of him, and they pour forth - prerequisite impassioned speech may or may not be present - by cascading down his cheeks. These are what we like to call Manly Tears, also known as Manly Tears Of Manliness

Just like it may or may not involve a Rousing Speech, they may or may not be someone's crowning moment, be it awesome, heartwarming, tear jerking or otherwise. My God, What Have I Done? may produce Tears of Remorse. Tears may be Due to the Dead, and so feature at a Meaningful Funeral or during To Absent Friends. Attempts to comfort may provoke Don't You Dare Pity Me!.

(Pain is, of course, right out. No matter how brutal the beating or how cruel the torture, the hero may scream in pain, but crying for it is unmanly. As is fear. Crying because you're scared shitless is also unmanly.)

This can also be a common audience response to particularly emotional moments in the more Hot-Blooded shows. In this case, it often overlaps with Tears of Joy.

If the character is particularly sensitive and so often moved deeply, see Tender Tears.

Sometimes the tears may be Tears of Joy, and paired with the Fist of Enthusiasm.

Contemptible characters may attempt to characterize these tears as Water Works; the effect is to make them even more contemptible. The crying character may also apologize for them as a sign of weakness.

Contrast Sand in My Eyes, where the man denies to the end that he is crying. See also Not So Stoic. May be in the form of a Single Tear.

WARNING: Some tropers may take several attempts to edit this page on the first try. Fortunately, keyboards are water resistant, provided you lean back after the first few seconds of making a living example of this page while editing.

Examples of Manly Tears include: