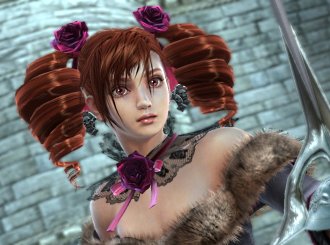 Basically a pair of huge pigtails on a girl, that are much larger than possible in Real Life, at least not without loads of hair gel. The minimum hair size is both tails combined must be at least the size of the girl's head.

There can be many reasons for this, although the most common are either to make the pigtails clear even in long shots, or just plain Rule of Cute.

Quite often these pigtails have the hair in a spiral, which overlaps with Regal Ringlets. However, girls with Mega Twintails are not necessarily of high station. It is more of a compromise halfway between the "girlyness" of Regal Ringlets and "tomboyishness" of Girlish Pigtails, both in looks and in personality.

Not to be confused with just having long hair in pigtails (like Hatsune Miku, Ruri, or Cure Melody).

A Sub-Trope of Anime Hair, and Bigger Is Better.

Examples of Mega Twintails include: