Tropedia
Register
Don't have an account?
Sign In
Advertisement
in: Trope, This Index Happened Offscreen, Narrative Devices,
and 8 more 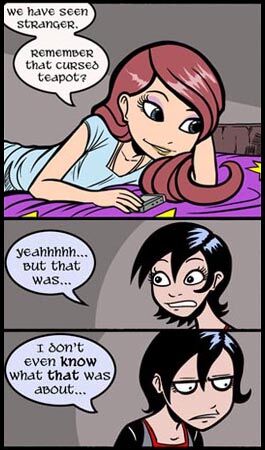 The Noodle Incident is something from the past that is sometimes referred to but never explained, with the implication that it's just too ludicrous for words, and the reality that any explanation would fall short of audience expectations. Questions about it are often met with "You Don't Want To Know…" Persisting is a good way to press a character's Berserk Button.

Commonly introduced to the audience through a Wiki Walk. Or by having characters react to some fantastic and improbable event with "Oh no, not again."

Named for an incident referenced by the characters of Calvin and Hobbes, where the author admitted he decided against ever stating what happened, as he figured nothing he could come up with would be as outrageous as what the readers thought happened.

The inversion of this would be Let Us Never Speak of This Again, where the event in question is shown onscreen and the characters make a pact to never mention it.

Compare Second Hand Storytelling, Take Our Word for It, Cryptic Background Reference, Noodle Implements, That Mysterious Thing, What Did I Do Last Night?. Reminiscing about a Noodle Incident by the people involved can result in Lost in Transmission for an outsider. Compare and contrast Offscreen Moment of Awesome, where the off-screen incident would have been better on-screen. See also Cow Tools. Enough such incidents create a character who has Seen It All. If a Noodle Incident is essential to solving a mystery, it's a Riddle for the Ages. If it results in the person/people involved being banished from wherever it happened, they've become Persona Non Grata. See also Great Offscreen War. Contrast Oblivious Mockery, where characters talk about an event they don't know happened but the viewer does (most of the time). Should not be confused with Woody's Finest Hour, which is where a new installment was intended to be made after leaving things to leave room for it, but it gets cancelled.

Please do not confuse with the GNR album "The Spaghetti Incident?" (which is, however, a noodle incident itself). Or The Google Incident. (Or the sequel.)

Examples of Noodle Incident include: