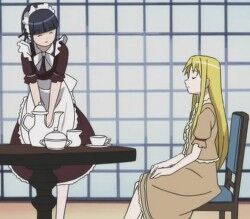 Literally, a formal Japanese word for "young lady", the term Ojou (often Ojou-san or Ojou-sama, as they are the more formal honorifics) is typically used in anime when referring to wealthy, high-class female characters.

This means that while she is often rich, and occasionally even an actual Blue Blood, the key point is that other people treat her like royalty, whether or not she actually is. Sometimes an Ojou can actually attain her status simply by personality alone (often in high school settings where she is probably a School Idol), by being so heavily idolized that a fanclub springs around her, elevating her to a status far above that of those around her, while leveling violent reprisals against any who would treat her as a commoner. Oftentimes, a wealthy Ojou is found in a leading role in the Absurdly Powerful Student Council. In fact, her wealth is often the Hand Wave explanation for the absurd power: they make the rules because they have money.

Most Ojou characters can be boiled down to three main types, A Yamato Nadeshiko / Proper Lady variety, an Ice Queen Variety and a Royal Brat variety. See the Analysis For This Page to see how those three types tend to play out.

Though together for the purposes of this entry, the ojou, or daughter of a high-society family, is written with distinctly different kanji than the oujo, or princess (literally "lord's daughter"). In Japanese, expect all types of ojou to use the more formal first-person pronoun "watakushi" rather than the more casual (and feminine-only) "atashi," and to make heavy use of the "wa" feminine emphasis particle at the end of their sentences.

A staple feature of these characters are to have Princess Curls or a Hime Cut for a hair cut and for the Royal Brat type a Noblewoman's Laugh.

A character saying "oujo-sama to oyobi" (Lit. "Call me queen") implies something else entirely.

See also Princely Young Man for the Spear Counterpart of this trope. Boys Love works occasionally features a male version of the Ojou.