Tropedia
Register
Don't have an account?
Sign In
Advertisement
in: Work, Science Fiction Films, Films of the 2000s,
and 2 more 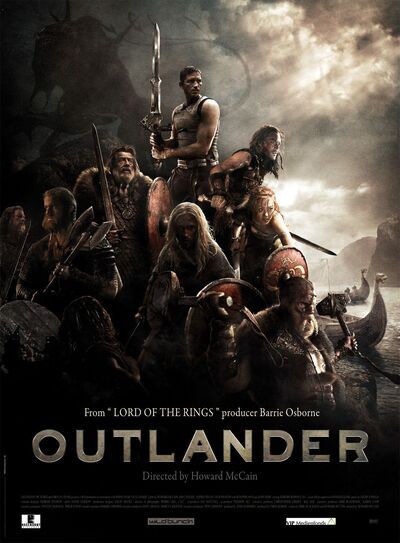 Vikings versus aliens. If that doesn't make you want to see this movie, then nothing will.

Outlander is a 2008 film with a B-Movie plot and inexplicable A-List talent: the cast includes Jim Caviezel, Sophia Myles, Jack Huston, Ron Perlman and John Hurt, and the crew includes Barrie Osborne, producer of the latter two Lord of the Rings films. The director, Howard McCain, originally conceived of the story as a sci-fi adaptation of Beowulf, then screenwriter Dirk Blackman reworked it into something that didn't wear its inspiration on its sleeves so. The resulting film could be considered a sci-fi real story behind the legend of Beowulf.

The film opens with a spacecraft crashing into a lake. The only survivor is the Space Marine Kainan. After learning from his ship's computer that he's in Norway, and getting the local language beamed into his brain, Kainan grabs his gun and sets off. He finds an empty village--burnt to the ground, and all its inhabitants dead or missing. He then gets jumped and knocked unconscious by the Norse warrior Wulfric.

Kainan wakes up, imprisoned in Wulfric's village. When questioned about the destroyed village, Kainan says that he was hunting the creature responsible. Naturally, he isn't believed. That night, Kainan escapes his bonds and attempts to sneak away, but at the same time, a creature attacks the village and kills several of the warriors. The creature escapes, and Kainan is recaptured.

The following day, Kainan is brought before the King, Rothgar, and questioned again. He explains that the creature from the previous night was a Moorwen. It had stowed away on his ship and caused it to crash--and that if they do not hunt it down, then it will hunt and kill every last one of them...

Has nothing whatsoever to do with Diana Gabaldon's novel series of the same name.