Tropedia
Register
Don't have an account?
Sign In
Advertisement
in: Trope, I Have Your Index, Stock Poses,
and 2 more 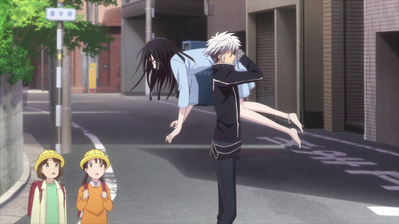 Over-the-shoulder carrying (abbreviated OTS) is a method to transport another person. The person is laid face down over one's shoulder with their upper body to the rear. The person's legs are held at the hollow of his/her knees to secure them in this position. This position allows carrying another person, even if they are the same weight as oneself. It can be a humiliating pose for the person being carried, since they're turned into a passive object, with their face down and buttocks pointing up and to the front.

In general, when this happens, there are four tiers of victims (usually female) when the person doing this to them is intending to take them somewhere against their will.

When this happens in fiction, usually (but not always), it involves an antagonist carrying a Distressed Damsel or other captive that he/she has caught or subdued. Contrast Bridal Carry, which is more romanticized and typically involves The Hero saving someone instead of capturing them. Compare Neck Lift and Hoist Hero Over Head, which are other ways a villain shows of their strength by lifting up a victim.

Sometimes called the Fireman's carry, although this is actually the name for another position where weight is supported on both shoulders and the carried person is held by both legs and whichever arm is draped over the carrier's shoulder.

Examples of Over-the-Shoulder Carry include: