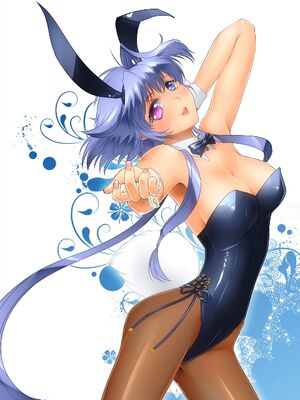 The Playboy Bunny... a sexy costume popularized by the Playboy Club, composed of a corset (color varying, though often black), fake bunny ears, a collar with a Bow Ties Are Cool, cuffs, a fluffy tail (usually made of cotton, fur, or feathers), some hose or stockings (usually fishnets) and high heels.

For whatever reason, any female character (or even a male as a joke) could end up in this costume. Most often the pretext is quite flimsy, as it is hard to pretend that this is anything but Fan Service. Mainly seen in Anime and Manga; not absent from Western works but rarer, precisely because Playboy has a trademark on this particular outfit, and American copyright laws are a little stricter than in Japan.

This is one of the most common forms of Fetish wear, along with its Sister Tropes, the French Maid Outfit and the Naughty Nurse Outfit. If done willingly by the woman, she's certainly trying to seduce some love interest. More often, for comedic value, she's not exactly happy about the dolling up, but can't escape it. Might have involved Instant Cosplay Surprise.

It should be noted that the original Playboy Bunny outfit simply used stiffened ribbons tied to resemble rabbit ears. Many of the more modern depictions have Nekomimi-style ears.

A Sub-Trope of Sexy Whatever Outfit.

A Spear Counterpart of sorts would be the Chippendales Dancers.

Examples of Playboy Bunny include: