Tropedia
Register
Don't have an account?
Sign In
Advertisement
in: Trope, Time Travel Tropes, Speculative Fiction Tropes, Portal to the Past

Portal to the Past 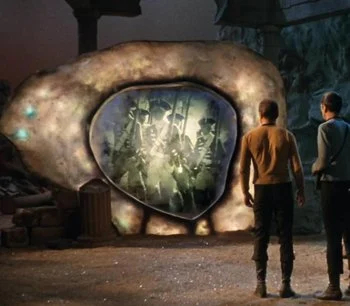 Who needs a Steampunk Time Machine or alien police boxes? Certainly not someone with a portal to the past. It might be the result of a eddies in the time stream or a magic spell, or it might remain unexplained in a Magic Realism style. However it happened, the portal is your two-way ticket to time travelling fun.

The portal is usually synched up with the modern day, so that an hour on this side is equivalent to an hour on that side, thus allowing relationships to develop and justifying the existence of San Dimas Time. However, if the story is a little more tragic then time might move faster on one side, making the character on that side age much faster.

If a melancholy ending or moment of tension is required, a Portal Slam may come into play.

Note: Please don't duplicate entries between this trope, Meanwhile in the Future, and San Dimas Time.

Examples of Portal to the Past include: