Tropedia
Register
Don't have an account?
Sign In
Advertisement
in: Trope, Suspiciously Convenient Index, The Plot Demanded This Index,
and 2 more 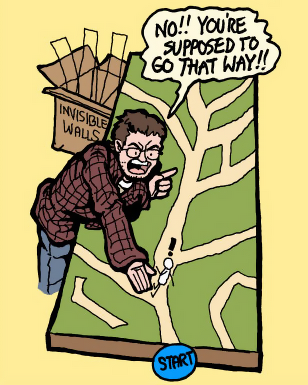 Being the Game Master of a Tabletop RPG campaign is a difficult business: Regardless of whatever exciting Story Arcs you've planned and worked out in advance, there's no guarantee that your human cohorts will proceed according to plan. After all, if they don't know what's going to be in store for them, how will they know to get their characters to the right place at the right time instead of, say, getting Sidetracked by the Gold Saucer?

The answer is called Railroading: In short, the GM takes any measure necessary to ensure that there is only one direction the campaign may proceed — his planned direction. This can manifest in any number of imaginable ways; some of them subtle, others ... not so much:

...The list goes on and on, the exact possibilities limited only by the GM.

In practice, the use of Railroading is generally regarded as one sign of a poor GM, as forcing the players down a single predetermined path (like cars on a railroad track, hence the name) runs against to the collaborative nature of a tabletop RPG in the first place, where every player is allowed an equal voice in dictating what happens next. If players discover the Railroading and rebel against it, they are going Off the Rails. (And if going Off the Rails triggers a Rocks Fall, Everyone Dies, then the something about the campaign has failed on a fundamental level.)

On the other hand, while complaints of Railroading are directed primarily at difficult or unimaginative GMs, there are also difficult and unimaginative players for whom a swift kick in the caboose might be the only way to get them to do something even as simple as leaving the tavern in the first town (or immediately coming straight back to it). A subtle GM who knows his players and makes an effort to maintain at least an illusion of free will and exploration, and really does make stories that are That Damned Good, can probably get away with herding a few cats. (Console and PC RPGs, which by their very nature are predetermined stories, do this all the time.)

In a similar vein, an occasional Railroading can do wonders to kick-start the campaign should players have run out of steam and be left with absolutely no idea how they should proceed next; a GM pointing the players down the nearest track and hoping they can play it can get the campaign moving again, to the benefit of everyone involved. Experienced GMs know when it is (and is not) appropriate to Railroad the campaign — a good measure is that if the players are currently having fun, there's probably no need to interfere.

Schrodinger's Gun can also be a useful tool for a subtle GM to silently railroad players without their awareness. If the GM spent a lot of time secretly preparing a dungeon to the North of the current town, but the players suddenly decide to go South instead, the GM may be able to — surprise! — secretly decide that this dungeon was instead in the South all along, and the players reach it just as the GM planned anyway. This form of Railroading (sometimes dubbed "railschroding") can be an effective tool, as the players are the ones driving the 'train', unaware that it somehow ends up in the same place no matter which direction they take it.

Of course, one advantage a GM always has over a console or PC RPG is that his players probably aren't going to restart the game from the beginning and realize he was leading them by the nose the entire time. (Note that for players or GMs who treat their tabletop game exactly like a console RPG, Railroading is 100% par for the course.)

No Sidepaths No Exploration No Freedom is a Video Game analogue.

Contrast Off the Rails, an attempt by the players to escape a GM's railroading.

Not to be confused with the Rail Enthusiast's favorite hobby.

Examples of Railroading include: