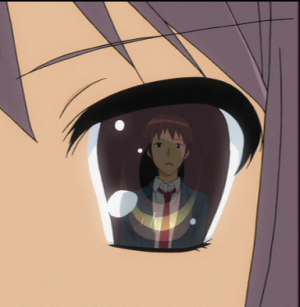 A character's eyes reflecting what they see. A useful visual effect because it allows the audience to see the character's reaction at the same time as they see the action happening. It's a nifty effect that has not passed the notice of writers and has been used by them in various ways.

May also be used with Cool Shades, Scary Shiny Glasses, lenses, and other forms of eye coverings.

Examples of Reflective Eyes include: