Tropedia
Register
Don't have an account?
Sign In
Advertisement
in: Work, Prime Time Cartoon, The Nineties,
and 7 more 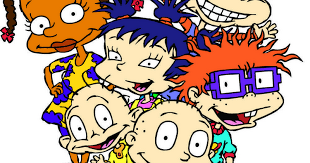 Rugrats was one of Nickelodeon's first and most popular original series, debuting in 1991.. Paraphrasing the description at nick.com:

Grown-ups act as if babies don't know anything. But the fearless, hairless Tommy Pickles and his baby brigade know what's really going on. They'd be happy to inform the grown-ups, if they could only understand baby talk. For the Rugrats, every day is an adventure, especially if the baby-tossing, doll-torturing 3-year-old Angelica is around. Luckily, when the going gets tough, the gang gets going!

The rest of Tommy's gang includes:

One of the original Nicktoons alongside Doug and The Ren and Stimpy Show, it was canceled after two seasons in 1994. Three years later with impressive rerun ratings, the show was Uncanceled and became one of the mainstays of Nickelodeon. Two standalone feature films were produced, The Rugrats Movie (1998) and Rugrats in Paris (2000). Both made a respectable box office gross. Rugrats Go Wild, a third Crossover film with The Wild Thornberrys (also a Klasky Csupo production), tanked hard and is largely responsible for the reduced work of Klasky-Csupo productions since then.

The successor series, All Grown Up, showed Tommy and his friends, ten years later as middle schoolers. Also had another short lived spinoff Angelica and Susie's Preschool Daze: the name pretty much says is all. Check out Rugrats Online for more information, and rejoice in the fact that the show is now on The 90s Are All That!