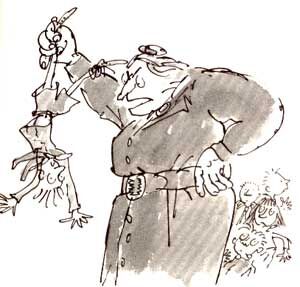 So you made it past the evil bus driver, avoided the cafeteria lady with her Mystery Meat, and dodged the bully in the schoolyard. You're safe now, right?

Guess again. Now it's time to face... that teacher.

You know which one. The teacher who singles you out for ridicule and humiliation. The one who openly mocks you in front of the rest of the class. The one who tells you they want you to fail because you don't deserve to move up. If they teach gym, you'd better be ready for Dodgeball Is Hell every day, if not worse. They're the Sadist Teacher, the education system's answer to Drill Sergeant Nasty (or worse!).

Sometimes they hate all children, but sometimes it's just one special child who becomes the target of their rancor. Either way, they are as cruel as they can possibly be within the confines of their job, but because they're a teacher, anyone seeking justice for their sadistic behaviour is likely to be summarily dismissed.

They're also almost always the most suspicious of either the High School Hustler or the Ordinary High School Student with a Secret Identity and determined to uncover the Masquerade. Worse, maybe they have discovered it, and now the hero has to keep them from proving it.

Principals, counselors, and coaches are no exceptions to this trope. Sadly, after escaping them at graduation, the hero may run into their classier (but just as cruel) college equivalent, Dean Bitterman.

All too often this is a case of Truth in Television. Sometimes this trope will be inspired by the creator's own personal experiences, but many examples take it Up to Eleven and portray levels of abuse that would have any real teacher fired on the spot.

See Stern Teacher for their more reasonable counterpart. Dean Bitterman is usually somewhere in between. May overlap with Evil Teacher, or with Sinister Minister in a parochial school. Pick on Someone Your Own Size comes in any time an adult sees a child or teenager as a personal enemy. Contrast Hippie Teacher, Misplaced Kindergarten Teacher, and Badass Teacher.

Examples of Sadist Teacher include:

Tedesco happens to be one of Alex's favorite teachers, and Alex is at first upset with his parents; however, Alex eventually realizes Tedesco is modeling behavior he doesn't want to be associated with and dis-associates with him.