Tropedia
Register
Don't have an account?
Sign In
Advertisement
in: Work, Shoujo Demographic, Manga of the 2010s

So Cute it Hurts 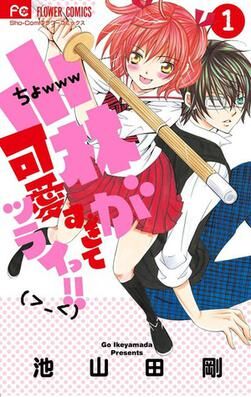 So Cute It Hurts!!, actually Kobayashi ga Kawai Sugite Tsurai!! (Japanese: 小林が可愛すぎてツライっ!!, lit. "Kobayashi is So Cute it Hurts!!", abbreviated Koba Cute!), is a Japanese manga series written and illustrated by Gō Ikeyamada. It was published in Shogakukan's Shoujo Comic, with 75 chapters and 15 volumes. It also had a 2-epísode OAV and a Visual Novel game for Nintendo 3DS

The protagonists are the twins Mitsuru and Megumu "Megu" Kobayashi. From Megu's part, she's a Japanese history Otaku with quite good grades and friends with two girls who share similar interests. From Mitsuru's, he attends a school different from Megu's and is quite the ladies' man and kendo practitioner... but kiiiiinda Book Dumb. So once Mitsuru must give some make-up tests and asks Megu to take his place this time, so he'll be able to go into some dates. Megu is not convinced but the following day she finds out that Mitsuru has taken her Sailor Fuku and then ran off disguised as her, so she's forced to take up Mitsuru's appearance via putting on his uniform and a wigh, and they crossdress their ways into each others' schools.

In Megu's school, Mitsuru finds out about the existence of the Alpha Bitch Azusa Tokugawa, daughter of the owner of the school and a teen model; her favorite bullying target is a deafmute girl named Shino Takenaka, and he decides to stand up to Azusa to protect Shino. On the other hand, Megu finds herself in trouble when guys from Mitsuru's school come to challenge her, thinking she's his older twin and wishing to fight "him"... but is saved by Aoi Sanada, the strongest and more handsome fighter around, who has an eyepatch over his eye due to an incident in his past.

Intrigued by their discoveries, the twins keep crossdressing to see what will happen. Megu reaches for Aoi, who's questioning his sexuality because he's attracted to her thinking she's "Mitsuru"; Mitsuru keeps defending Shino (whom he's falling for) from Azusa. And as time passes, the lives of these teens keep entwining in several ways. . .

Tropes used in So Cute it Hurts include:
Community content is available under CC-BY-SA unless otherwise noted.
Advertisement