Tropedia
Register
Don't have an account?
Sign In
Advertisement
in: Work, Films of the 1980s, Somewhere in Time, Film

View source
watch 01:32
Wiki Targeted (Entertainment)
Do you like this video?
Play Sound 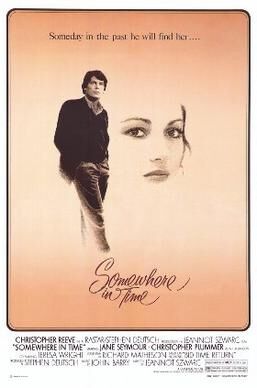 Even if you have Single-Target Sexuality, you just might give up after finding out that your One True Love lives in a different time period, but that doesn't stop the writer and playwright Richard Collier (Christopher Reeve), who, for lack of a better description, manages to psych himself back in time to meet a beautiful woman whose portrait he was captivated by. The space-time continuum is just no match for The Power of Love.

After his self-hypnosis, Richard arrives in The Edwardian Era when the lady in the portrait, the stage actress Elise McKenna (Jane Seymour), was visiting the same vintage hotel he was staying at in The Eighties. However, her overprotective manager William Fawcett (Christopher Plummer) won't hear of anyone romancing his star. . .