The swashbuckler is the most rigidly conventionalized of all the sub-genres of the Adventure genre, and one with close affinities to the Historical Fiction and Romance genres as well. A descendant of the capa y espada plays of the classical Spanish stage, it is nearly always set at some remote date, usually in the distant past (The Middle Ages and The Cavalier Years being favorites), generally either European or heavily Europeanized.

Its buckler-swashing hero (rarely a heroine) will be a Gentleman Adventurer, in ethos if not in rank; character motivations will be simplified to the point of Black and White Morality, and the whole work will be heavily tilted toward the idealistic side of the Sliding Scale of Idealism vs. Cynicism. 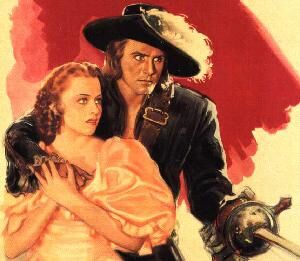 It will nearly always include a love-story as an important factor of its plot; despite the historical setting, the Rule of Cool will inevitably trump historical accuracy and Hollywood History. One may expect the hero to wear a sword for the inevitable Sword Fight. Historical Hero Upgrading and Historical Villain Upgrading will also be strongly in evidence.

The genre flourished most vigorously in the years in which the ideals of Romanticism dominated popular fiction, ca. 1830-1950. It found its original inspiration in the historical novels of Sir Walter Scott. The "juvenile historicals" of authors such as Harrison Ainsworth, G. A. Henty, Luise Mühlbach, Charlotte Yonge, and above all, Alexandre Dumas, père further defined the genre.

The "penny dreadfuls" of the mid-Victorian era, very often adaptations of the adventures of Folk Heroes such as King Arthur and Robin Hood, contributed to the jettisoning of all the non-essential characterization and historicity of the stories, and when at the end of the period the genre was picked up by serious authors such as Richard Harding Davis, Anthony Hope, and Robert Louis Stevenson, it had essentially assumed the character it would bear throughout its future career, both in novels by authors such as John Buchan, Johnston McCulley, Stanley J. Weyman, and Rafael Sabatini, and supremely in the films (based, in theme if not in actual plot, on those novels) generally associated in the public mind with Douglas Fairbanks, Sr., and Errol Flynn under the blanket soubriquet of "Pirate movies."

The measure of a true swashbuckler lies precisely in its mixture of the Adventure, Historical Fiction, and Romance genres (which compare and contrast), combined with extreme simplification and stylization, particularly of the moral outlook. Since the swashbuckler is a mixture of other genres, its constituent elements will often be found in those genres.

Tropes Associated With the Swashbuckler Genre Include:

Some Authors and Series Associated With the Swashbuckler Genre Include:

Other Notable Swashbucklers Include: