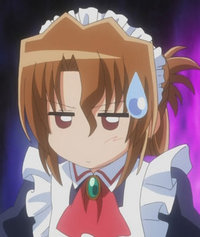 Confusion, exasperation, embarrassment and similar emotions manifest as an unusually large sweat drop that appears on the temple or the back of the head. Sometimes the "drop sweat" symbol can even apply to a group of people as well. Either a gigantic sweat drop appears somewhere in the middle of the crowd, or a few big drops are scattered around (the latter variation is also common in comic books).

Usually limited to comedic anime, but even some serious ones indulge. A common sight in a Deadpan Snarker or Only Sane Man when surrounded by idiocy.

The Sweatdrop is also appearing in anime-influenced American animation. The exaggerated version of this is practically a Discredited Trope; most shows nowadays use much smaller, more modest sweatdrops instead.