Tropedia
Register
Don't have an account?
Sign In
Advertisement
in: Work, Pages Original to All The Tropes, Science Fiction Films,
and 5 more 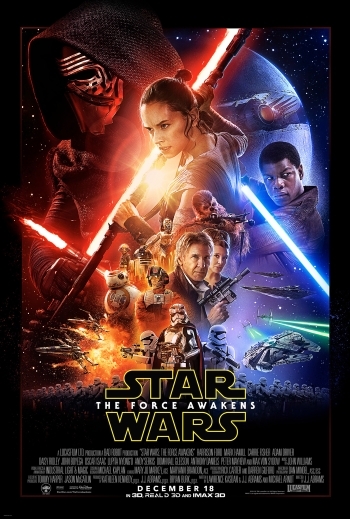 Tragically, it was also the last to feature Kenny Baker as R2-D2 and Erik Bauersfield as Admiral Gial Ackbar.

Set 30 years after Return of the Jedi, the galaxy has come under siege from an Imperial remnant, the First Order. This order, led a mysterious masked man named Kylo Ren, has begun a cold war with the Resistance, competing for a map that says where to find the legendary Luke Skywalker. . . while the defected Stormtrooper Finn, the pilot Poe Dameron and the scavenger girl Rey find themselves caught in the middle of all of this mess.

Released in December of 2015, The Force Awakens was followed by The Last Jedi in 2017 and The Rise of Skywalker in 2019.

Tropes used in The Force Awakens include:
Community content is available under CC-BY-SA unless otherwise noted.
Advertisement