The Golden Age of Animation

View source
watch 02:56
Doctor Strange in The Multiverse o Madness - The Loop
Do you like this video?
Play Sound
File:Cameos 4165.jpg

The Golden Age Of Animation is a period in animation history that began with the advent of Steamboat Willie on November 18th 1928 also with Fleischer, Warner's and MGM's rise to prominence in the years following. It faded out in the late 1950s / early 1960s when theatrical animated shorts slowly began losing ground to the new medium of television animation.

Many memorable characters emerged from this period, including Mickey Mouse, Bugs Bunny, Donald Duck, Daffy Duck, Popeye, Betty Boop, Woody Woodpecker, Mighty Mouse, Mr. Magoo, Tom and Jerry, and a popular adaptation of Superman, among many others that haven't survived along the way. Feature length animation also began during this period, most notably with Walt Disney's first films: Snow White and The Seven Dwarfs, Pinocchio, Fantasia, Dumbo and Bambi.

Prior to 1928, animation was a dying novelty; less than 23% of theaters carried animated short subjects, the demand wasn't high for these shorts and they were continuing to lose ground against their live-action counterparts. Felix the Cat and Out of the Inkwell were the only series of prominence during this period, and even they were starting to lose steam by the closing of the twenties. Max Fleischer, creator the Inkwell series, was a principal investor in Red Seal Pictures which was a distribution company that produced a variety of films not limited to animation, until it went defunct in 1927. This came shortly after Max was experimenting with animated lip-synch through his groundbreaking animation series Song Cartunes-- namely with their final effort By The Light of the Silvery Moon. The series which lasted from 1924 - 1927 although synchronized sound wasn't incorporated until 1926, its argued by many to be the first sound animation, although that distinction could arguably be credited to Princeton Sound Test of 1925 and some of Edison's obscure animation experiments with cut-out animation which had sound incorporated into it.

Regardless Max's series pioneered the use of the bouncing ball. Ironically Lee Dee Forrest's sound on film process which Fleischer used had been patent infringed by Pat Power's (this is how the cinephone came to be) and sold to Disney. After Song-Cartunes and Red Seal Distribution company went under, Max didn't have the necessary funds to pay back the film labs to have the negatives returned, so Alfred Weiss took care of the payments and help establish a deal with Paramount Pictures, which lasted until the Fleischer's company was acquired by them in 1942. Pat Sullivan, owner of the Felix cartoons, was mourning the death of his wife, and his addiction to booze made it increasingly difficult to discuss business matters with him, even moreso after his subsequent mental degeneration, and death. So in all likelihood this played a role in him not seeing the potential of sound.

Paul Terry incorporated sound within the release of Dinner Time, a month before the release of Steamboat Willie. However, it lacked the appeal and believability of the latter film due to it being post-synchronized, meaning the sound was synchronized after the animation had been completed, making the characters feel out of place. Paul Terry was encouraged by Amadee Van Beuren to continue producing sound animation, but he rejected the offer and was fired on the spot. He then decided to start a business partnership with Frank Moser, noted for being an exceedingly fast animator with a huge output, leaving John Foster to lead Amadee's department.

This gave Walt Disney the leverage he needed to progress within the industry. Charles Mintz rejected his proposal to raise the budget on his Oswald the Lucky Rabbit cartoons, and threatened to lower the budget and recruit his staff including Harman and Ising and Friz Freleng. Walt persevered, and managed to have Ub Iwerks provide him drawings that would serve as the groundwork for Mickey Mouse. They had produced Plane Crazy and Gallopin Gaucho without much praise or reception, when doing a silent release for Steamboat Willie. They came to the conclusion that the only way to have Mickey ever be marketable was to exploit the profitability of sound film. Steamboat Willie was derived from Steamboat Bill, Jr., a Buster Keaton feature of the day also the title of a novelty song by Arthur Collins.

Meanwhile, Charles Mintz was not fulfilling his promise to improve the state of Oswald for Universal, and thus had the carpet pulled out from under him. The series was given to Walter Lantz after he won a poker game against owner Carl Leammel. Lantz, who started his animation career at the International Film Service at Hearst, collaborated with J.R. Bray on such series such as Dinky Doodle and Unnatural History, and was a gag writer for Mack Senett. Lantz in collaboration with Bill Nolan produced the remaining Oswald Rabbit shorts beginning in 1929 and lasting into 1937[1], around this point Tex Avery began making his earliest creative contributions to the field of animation; His work is easily noticeable through such entries like Grandma's Pet and Towne Hall Follies. In many instances Avery filled in for Bill Nolan when it came to directing duties. Bill Nolan departed Lantz in 1935, he later resurfaced in Max Fleischer's Miami venture in the late thirties where he was credited as an animator for Gulliver's Travel's.

Early cartoons were very musically oriented and simply drawn, for obvious reasons--animation was an expensive medium and in order to remain profitable, the cartoons had to be produced and rushed out as quickly as possible, with little time for refinement--using public domain music (or in Harman and Ising's case, the entire Warner Bros. music library) solved the music problem, allowing song snippets to be quickly added and timed to the animation. Color got off to a slow start: while cartoons were initially hand-colored on occasion in the past (e.g. in the works of Winsor McCay), it wasn't until the appearance of the animated segment of the 1930 Universal film The King of Jazz, that the first cartoon to make use of the (two-strip) Technicolor process appeared. Then in 1930, former Disney veteran Ub Iwerks brought color to standalone sound cartoons via the first Flip the Frog cartoon "Fiddlesticks." for MGM studios. A few years later, Disney followed suit with its lushly colored Silly Symphonies short "Flowers and Trees"--however, studios like Warner Bros, Fleischer and 20th Century Fox's Terrytoons would stick to black & white until many years later.

But regardless of the rising quality of cartoons, they were still relegated to be merely filler material that played before the main attractions of feature length films, however, and animation wasn't getting the treatment it truly deserved. Walt Disney went out of his way to put a stop to that notion--he was constantly pushing technical boundaries in his cartoons, in an attempt to be the best studio out there-he quickly abandoned the old fashioned weightless rubberhose cartoons and began integrating more naturalistic techniques into his works, which contributed to his wide success. However, Walt soon came to realize that no matter how much effort he put into these shorts, they would never be particularly profitable--this was because the shorts' wages depended on the length of the film, rather than popularity. Thus came Walt's next big step for animation--in 1934, he began work on America's first feature length animated motion picture and finished it just in time for Christmas 1937: Snow White and The Seven Dwarfs.

While the idea of a feature length animated film was nothing new to foreign countries, and the Fleischers made their own 20 minute short feature the year before, this was the first one to have both sound and color, and had shockingly high quality animation and art productions which blew all of the competition away and still manages to hold up to this day. That and Walt's simple yet effective story formula--use the characters to define the movie, and not have the plot define the movie. While Snow White was originally derided during production as Disney's Folly, even by his own wife, when the film unspooled in theaters, it was an instant success, receiving universal praise from critics and audiences and for its time was the most financially successful motion picture ever made.

But all was not well, for Disney's influence was a very mixed blessing for the whole industry. On one hand, it began building on the idea that animation could compete with live action in a way that earlier cartoons could not, but on the other hand, the animation became much, much more expensive and also required much more skilled draftsmen, robbing many animators from previous years of their jobs, due to no longer being able to keep up with the high demands of their studios. Also, almost every studio from the time period--sans Terry Toons--began copying Disney's works. Soon, everybody, from the Fleischer brothers, MGM's big budget studio led by former Disney veterans Harman and Ising, to even low budget outlets like Walter Lantz, Van Beuren Studios and the Ub Iwerks studio were trying to ape Disney. Nonetheless, all of these attempts led to dead ends, as those studios only copied the superficial aspects of Disney cartoons--the fairytale-like settings, color and lush animation, but none of Disney's character or storytelling skills which helped make them such a hit to begin with.

Fortunately for the other studios, the tables were turned on Disney when rising star Bugs Bunny made his debut in 1940, incidentally the same year when Disney experienced the disastrous failures of Pinocchio and Fantasia. Soon, Looney Tunes became the prime cartoon series of the era, complete with other studios trying to cash in on this new breed of gag cartoons, including the then struggling Disney, among them being Walter Lantz's Woody Woodpecker, Tex Avery's MGM shorts, Tom and Jerry, Columbia Cartoons' The Fox and The Crow, Herman and Katnip, among many other imitators. Despite the limitations in budget, resources and manpower due to the War effort of the time, many animation connoisseurs consider the 1940's to be the peak of this era, where comedic timing and fluid animation was easily at its highest point in animation history.

To some, the decline of this era began at some point in the early 1950's. Due to rising production costs and changing tastes, animators were forced to cut more and more corners in their work and gradually adjust to the newer styles coming out at the time. UPA's excessive use of Limited Animation in The Fifties actually rose to popularity. The rise of television didn't help matters either. Eventually, with the inevitable Fall of the Studio System that had managed cartoons before, cartoons gradually declined more and more in quality, and as a result began to fall out of popularity in the theaters, usually banished to television, mere shadows of their former glory. But help was definitely coming.

For a more comprehensive history of the era, visit The Other Wiki's take of it here.

For this era's precursor, go to The Silent Age of Animation. For its successor, check out The Dark Age of Animation. And for a taste of some of the best cartoons this era has to offer, take a gander at The 50 Greatest Cartoons and The 100 Greatest Looney Tunes lists. For the live action film equivalent of this era, visit The Golden Age of Hollywood.

Assorted information about the Golden Age of Animation follows.

Characters, Series, Films and Their Studios

The Works of Terry Toons:

The Works of Van Beuren Studios

Other Studios And Their Works:

Blogs and Websites Dedicated To This Era Of Animation

Tropes that are associated with this era 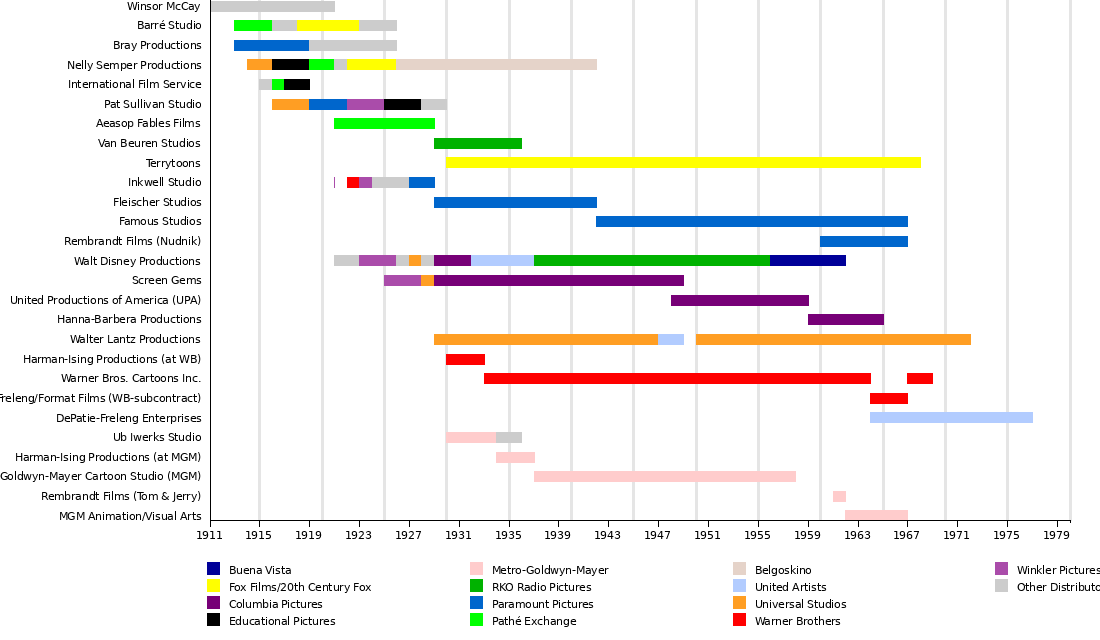