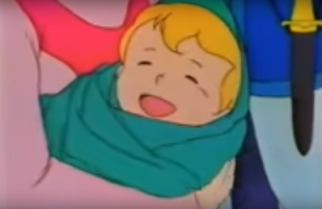 A subtrope of Dawson Casting, one specifically about newborns, or at least TV "newborns". Whenever a supposedly just-born child appears on TV, the baby you will see will actually be several months old. Put this down to a mixture of simple ethics, employment laws, and casting laws that make it unacceptable to cast a real newborn in such a role. This is because sound stages are hot, bright, stuffy, dirty places — not a great environment for a newborn infant prone to infection and unable to control body temperature. And Now You Know.

This can have an unfortunate side effect, due to the fact that Reality Is Unrealistic, making a person's first encounter with a real newborn possibly squicky. Real newborns aren't clean-looking, gurgling bundles of cuteness. Real newborns are covered in things like blood, amniotic fluid, and other bodily substances, up to and including fecal matter. There is a chance they could be covered in a peach fuzz like substance called "lanugo" (a remnant of when our ancestors were a lot hairier than we are now; most fetuses lose it before birth but obviously, a few don't). Their skin will usually have a red hue to it as well, and look somewhat "wrinkly", especially if they are considerably premature. On top of all this most newborns have noticeably deformed heads from the birth process since their skulls aren't yet closed and their bones are very flexible. To say nothing of the placenta that should be popping out with the babe. Even newborns that have been cleaned up and are a couple days old are generally Ugly Cute at best. It's been said that all babies look like Winston Churchill.

This can even carry over to newborn animal babies, who fiction likes to depict as the cutest, smallest things ever to arrive, when in actuality most newborn animals arrive slimy, hairless, and often eyeless because their eyes may be covered by a layer of skin that takes some time to wither away. Take a look at a newborn rabbit, and you'll think your bunny just gave birth to a dumpling.

In fiction, birth is a much cleaner, nicer (but still painful for the mother) process, and in American films and TV shows usually happens in a tent. The four-month-old tot pops out of his/her Mommy as clean as whistle and is bundled up.

This is an Omnipresent Trope so only aversions, subversions, inversions, parodies and the like should be added.

Examples of Three-Month-Old Newborn include: