Tropedia
Register
Don't have an account?
Sign In
Advertisement
in: Trope, Time Travel Tropes, Cops and Detectives,
and 3 more 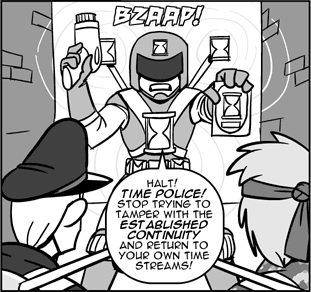 Time Travel can cause a lot of damage. You could run into the Butterfly of Doom, leave behind a Timeline-Altering MacGuffin, try and bump off Hitler or create a Temporal Paradox. Therefore, in any society where Time Machines are easily accessible, deliberately altering time will be a crime. In addition, there may be people, most likely a police force or The Men in Black, who fight those who violate the sanctity of time.

The existence of Time Police is implicit in "time travel is illegal" scenarios - if they didn't exist in some form, it wouldn't be illegal. And if the illegality is anything more than a throw away line, people are going to worry about being found by the Time Police.

Of course, not all who police time are part of an official organization. In a setting where time travel is not easily accessible, there may be no laws to cover altering the timeline. Time Police in this case is any individual or group that takes it upon themselves to make sure that time plays out the way it's "supposed" to and keeps the timestream free of paradoxes. They may or may not be supernatural in origin, in this case.

Although Time Police are usually intended to be True Neutral, with their only obligation being to keeping time clean, so to speak, they will often fight on the side of good anyway. Somebody ought to check the screening process. Although there's an increasing deconstructive trend to make them Knights Templar willing to do anything to preserve the timeline they want.

Oddly, if they're introduced in a long-running science fiction franchise, the question of where (when?) they were all the other dozens of times that time got messed up is barely handwaved if mentioned at all.

Also, Time Police covers other activities besides hunting down reckless or malevolent time-travelers. They spend most of their time protecting Adolf Hitler from being assassinated.

If there is no such group in a setting it may come down to the heroes to take care of the same. This can prove to be difficult. Time Police are very common in a world with Casual Time Travel.

Sister trope to Clock Roaches. While the Time Police are people, and therefore fallible and have agendas, who happen to use Time Travel technology to do what they see as their duty, Clock Roaches are animals, often non-sentient, who are inherently able to attack time travelers. In contrast to Time Police, they also happen to be Nigh Invulnerable, Eldritch Abominations, and/or Have Reserves. Either way, though, they both serve the same purpose as tropes: to provide an unambiguous in-universe reason why trying to change the past is a very bad idea.

Examples of Time Police include: